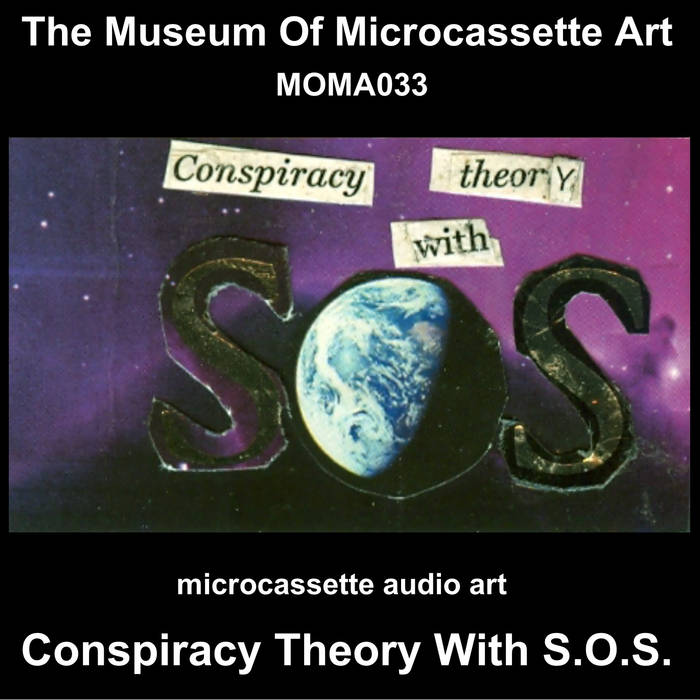 recorded in Jacksonville, Florida
September 2013
with a SONY microcassette-corder M-450 Clear Voice Plus

S.O.S. attempts to bridge the gaps in our consensual reality, providing clues and insight into the world of conspiracy as he sees it, spy tech discotheque and astral garage psych with a splash of Mario paint for colour, rated G.

I kept thinking of someone using a microcassette recorder to archive and document their paranoid conspiracy theories sort of like Mel Gibson's character in "Conspiracy Theory " in the fashion of a noir detective rambling on into a Microcassette about his case , so my conception of the album is meant to have some relevant information that I firmly believe constitutes the reality of social engineering and mind control as a further example and warning to listeners that nothing is what it seems yet parts of the tape are meant to be stylized abstraction of paranoia secret agent case numbers though I think that only comes off at one point n side 2 , I had a lot of ideas for the tape but there was a picture in my head that I followed until I felt that the basic colors I needed were all there so there was only a direction by sight and feeling and not by direct initiative of words , on side 1 I do a reading from the "silent weapons for quiet wars " chapter in "Behold A Pale Horse" , the bit on 440 hertz was written by a fellow whistleblower but is well documented and relevant , I wanted to direct the conspiracies to music related phenomenon considering we're all experimental musicians here, I took various bits of knowledge offline by searching on The Beatles and tavistock and also from the Laurel Canyon Conspiracy which I recommend everyone read , search Laurel Canyon Conspiracy and it's the first thing that pops up , it talks about how the children of the Elite ruling bloodlines and military intelligence came together to create the hippie movement and subsequently they were all killed or died with conspicuous timing or else were promoted into hollywood or the pentagon etc. , other sources include ninja turtles , 80's cartoons , Ancient Aliens , UFO documentaries , and I wrote the lyrics for the Mario Paint rap on side 2 that essentially pegs what I want the listeners to know , this album constitutes more of a representation of my ideal conspiracy theory album rather than an actual conspiracy theory album itself , the acid garage psych is performed by my band " the Space Brothers " and the listener will experience a moment from my other band " The Two Witnesses"a.k.a. S.O.S. & West Of Whisper (W.O.W.) the Mario paint music was made on ye olde Super Nintendo, I also play Sitar and Ectara , I utilized previously extant writings for the most part to assist me in my artistic vision as opposed to the overwhelming task of penning my own explanations for the preliminary volume

my birth as an artist coincides with and is a product of my spiritual awakening, and chronicles my development as a living soul, so too I have felt the compulsion to spread awareness and attempt to transcend material illusion and conformity to the false reality we are subjected to in the war between light and darkness , since the dawn of time an array of cosmic beings have engaged each other on Earth with man's destiny hanging in the balance , these beings come from both higher and lower vibratory worlds and dimensions , there is a reality behind the consensual reality we all agree on , many of our conceptions of reality have been suggested to us without our knowledge and implanted into our human subcultures to bend our will, I believe the royal bloodlines we refer to as Illuminati have been working hand in hand with celestial " watchers" to guide the destiny of man into self deification but really I believe this is an act of rebellion against the Creator the ages old rebellion of Lucifer who masquerades as an angel of light love and peace , thus when the Beatles sing "all you need is love " they are talking about a love removed from the Creator of love , which can not truly exist , it is a trick , we are being lied to by wicked subservients of Lucifer who control the world's governments and technological civilizations , science and math and psychoanalysts and pharmacology breaking down mens' genes and dna into chemicals which can be controlled and turn a huge profit , psy-ops attacking man's subconscious mind , his faith in the Spirit of true life, the war of words which can create and destroy , the battle for man's soul , the matrix , the pentagon creates our subcultures , Hegelian dialect , slide of hands smoke and mirrors master mind plot to convince us to give away our God given cosmic inheritance to the devil who denies the Power of the Spirit , psychological warfare engaged through consumer media , the Masons are the architects across the world building the most perfect prison for the human race , secret societies binded by the blood oath to protect the secret of the angelic power to create and destroy given by the "ancient aliens" or fallen ones , the gods , people today do not think their own thoughts , we are programmed and have been successively programmed from generation to generation , I strayed from giving this album any religious connotation but the reality for me is that conspiracy and the battle of good vs. evil is inseparable and yet to the modern mind is intangible and sounds like kids' stuff , the turn of the last century began the last great psy-op for the mind of man " do what thou wilt " is the law which permeates our culture , Babylon , unfortunately as an artist I am frequently shunned by the so called free thinkers who have simply bought their conformity into witchcraft and and twist truth into a fabrication of their own to take credit for what clearly belongs to "God" or Elohim , the Creator , the english language is a masonic language that further capitulates our enslavement in our own thinking , this is the foundation of what I call conspiracy and this is tenement to my own thinking as an artist.

in short I do believe this world is brilliantly controlled by dark hidden hands and the truth is stranger than fiction , ancient megalithic monuments ? hollow earth theory ? Bermuda triangle , psychic phenomenon , slip of the tongue acknowledgements from people who pretend spirits are not real ? I found that the microcassette is the perfect medium to chronicle my thoughts as the medium was created for dictation , combined with an abstract stylization almost mocking paranoid conspiracy theorists in good fun of course but providing relevant insight into fact driven information and inspired by shows such as Conspiracy Theory with Jesse Ventura and Ancient Aliens , it's high time for S.O.S. to show the reason behind the name , it's intriguing in this information age ever since the last paradigm shift everyone has access to this knowledge and it's mostly either a joke to people or people carry it so far out it's ridiculous , but the truth is still out there , I've been into conspiracy thought heavily since the mid 1990's when it opened my eyes and I try as best to rely on my intuition when wading the waters as well as humbling myself to the Spirit of Truth that pervades throughout Creation

conspiracy is a fact because darkness hides from light ! the conspirators ultimate goal is to kill off the light and bring their darkness out from hiding , a global paradigm shift in consciousness disguised as world peace but without a moral compass " do what thou wilt"