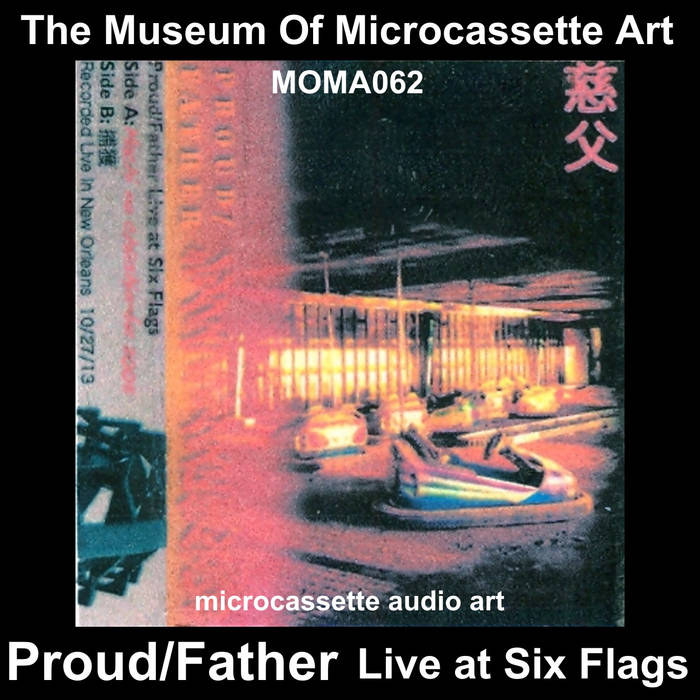 Side A was recorded in one take close to the entrance of the park. It’s one of those fake towncenter deals like Busch Gardens. I pretty much laid down my gear and recorded, then packed up and moved on.

The introduction is me being discovered by the park security, who were more baffled than angry. I guess the patrolling security wasn’t a rumor after all! It’s actually an edit of two takes, recorded by a stage where Batman themed shows happened when the park was open.

If you’re reading this, than the tape has successfully made it back to you. It’s been a fun experience planning, recording, performing, and designing for this release. I’ve had the idea to record at the abandoned six-flags rolling around in my head for a few years, and I used to joke around that I was recording my albums there. It always seemed like too much trouble to lug gear, a generator, recording equipment to such a sketchy (and creepy) location and risk being caught. When I heard about MOMA, I decided it would be a great opportunity to finally catalogue an event there, using battery powered gear and as little prep as possible, to hopefully capture some worthwhile sounds bouncing off the derelict amusement rides.

Six Flags New Orleans first opened as Jazzland in the Summer of 2000. I remember going once or twice in middle school, but I don’t remember too much about it. It was really just like any Florida theme park; rides, lines, food, and scheduled musical/theatre events all kind of happening at once, but with a “New Orleans” tinge (there was an arcade, but I never dropped any quarters there). It went under about a year later and was bought up by Six Flags. They refurbished the park and re-opened in 2003.

My family and I went to the grand opening that year. I feel it’s important to note the park is located in New Orleans east, in Bayou Sauvage, about 20 minutes (depending on traffic) from the actual city. It’s trapped between massive subdivisions and absolute wilderness (which gives way to Lake Pontchartrain). I remember the parking lot was larger than the actual theme park. We went back several times the next two summers to see live music events and walk around in circles, but it was never a big part of our lives or a regular spot, though it was only 15 minutes away from our home in Slidell.

Katrina hit in August of 2005. I remember the power going off while watching a news report the night before. Way too much happened to go into detail here, but it seems impossible to talk about New Orleans without the subject coming up. Life moved on and the park became like many of the deserted structures in the area, just something I drove past. There were reports of trespassers as early as the waters receded, but I didn’t venture out until about 2011 with some photography friends.


It seemed to good to be true; gates wide open, total access, completely abandoned, and security was but a rumor. I thought it would be the perfect place for a generator show, as Proud/Father was playing out a lot at the time, but I knew people in the scene rarely travelled farther than 10 minutes for a local show (New Orleans east does feel like a different city). I kind of shelved the Idea for a couple more as I continued to visit the location. When I moved back to New Orleans from Jacksonville in September, I knew I had to record there, and MOMA was the final motivation. After an overnight shift on Friday, I bought some batteries, loaded up my equipment, and drove across the bridge.