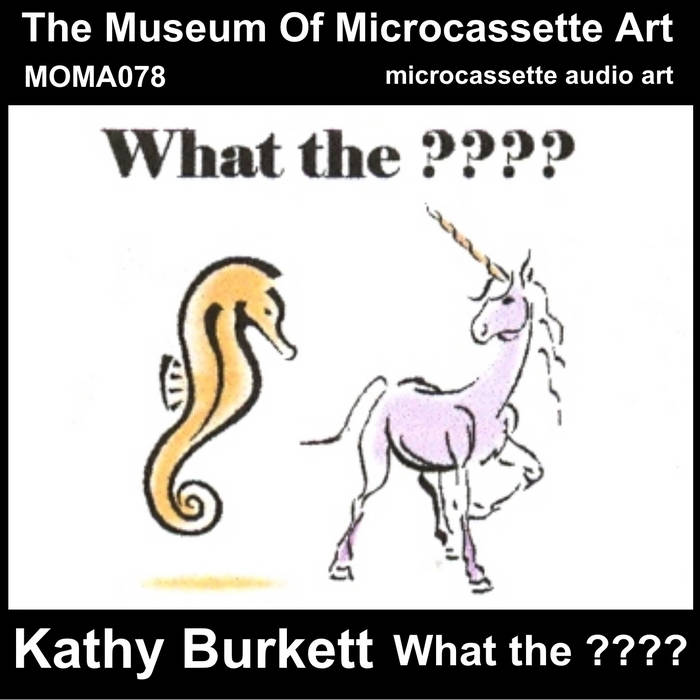 Kathy Burkett
What the ????
An Unimportant Audio Document

The album opens with Kathy speaking directly to us via the microcassette recorder as she attempts to find a way to get up and face the day in spite of pain which no amount of rationalizing can alleviate. We are also treated to visits with relatives, an orchestra concert, a voice electromanipulation piece and lots more real moments from "real life". The absolute highlight is the debate between Kathy and her husband Doug, about the "reality" of seahorses vs. unicorns > Unicorns seem to be more real than seahorses, when in fact seahorses ARE real? I was laughing out loud throughout. There is a reprise of the controversy later, and we get to ride along with Kathy and Doug as they discuss words for "pussy" and the differences between playing a home version of a game show versus what it would be like to do it for real in the studio in front of a real audience. On the surface this tape seems just about as mundane as it gets, but underneath the banality and everydayness there's something going on - to quote from the info sheet that accompanies the tape: "Know how unbelievably unimportant most every moment really is, though it may feel as though the earth is opening up beneath your feet and if it, in fact, does, that is an earthquake, for nothing is stable, everything is in flux... Certainty is a fool's delight, a mirage, a buffet of plastic food that is eaten and can never be digested."
- HM